“The Good, The Bad And The Ugly” of the SECURE ACT

Many moviegoers remember the classic western movie starring Clint Eastwood, entitled The Good The Bad and The Ugly. This movie title seems appropriate for the outcomes of the passage of the SECURE Act, (an acronym for Setting Every Community Up for Retirement Enhancement), which was passed by the House in the summer and the Senate on Dec 19th. It was then was rolled into the $1.4 trillion Further Consolidated Appropriations Act, 2020 and signed by Trump on Dec 20th.

Under this new law, non-spousal beneficiaries of IRA’s and 401k’s etc. will be required to withdraw all distributions from an inherited retirement plan in the 10 years following the death of the plan owner (with a few exceptions).

There are no rules as to when the money must come out, other than all out at the end of the 10 years. You could take some out each of the 10 years or take it all at the time you inherited the account or wait to the end of the ten years and take it all. No matter the case, many of these new beneficiaries will be forced to take the distributions during their working years, when they are less likely to need the money then when they would be retired.

Prior to this bill, a non-spousal beneficiary of a qualified plan could withdraw their distributions each year over their lifetime, based on the IRS rules and life expectancy table. This was called a “stretch IRA”, in that the distributions were stretched over many years. Many of those years of distributions would be when the beneficiaries would be retired (age mid 60’s to the end of the assumed life expectancy of mid-late 80’s) and would most likely in a lower tax bracket.

It has been said that the reason for eliminating the stretch IRA is to make the SECURE Act more tax neutral. In other words, with more part-time employees and the workers at smaller firms that did not previously participate in plans now participating, and they do not pay income tax at the time of the retirement contributions, that lost revenue must be made up elsewhere. Non spousal beneficiaries will be paying the compensating taxes as they are forced to take the funds out in the 10 years, many of which will be when they are still working.

In general, any legislation that will help people save more money for retirement is a good thing. But in this case the bill misses the mark based on what appears to be flawed thinking.

1. The first problem is that eliminating the stretch IRA defeats the purpose of having retirement accounts, which to withdraw funds when one is retired. The new bill will force many people to make withdrawals while they are still working.

2. Eliminating the stretch IRA is contrary to the principle of compounding interest. The longer you are invested, the greater the growth. The new rules allow for compounding for a max of 10 years. The prior rules were based on life expectancy and could be 20, 30 or more years.   More growth means more security for the beneficiary and more taxes for the government. See the example below. Under the old rules, there would be more than twice to money to spend and significant more taxes to be paid as well

3. Many part time workers or employees of smaller firms who are primarily the ones that could benefit from the legislation, are not in a position to take advantage of the new rules and save more for retirement in that they spend all the income on a month to month basis.

According to a recent survey by bankrate.com, less than 40% of survey respondents said they would be able to cover a $1,000 setback using their savings. That means that over 60% of Americans cannot afford to save and maintain $1,000 savings.

The Pew Charitable Trusts found in 2015 that many families lacked funds to cover a $2,000 expense.

The Federal Reserve has repeatedly found that a significant share of households would struggle to cope with an unexpected $400 expense.

The AARP found that more than half of American households (53 percent) lacked an emergency savings account...

If part-time workers or low wage workers cannot establish a savings account with a couple of thousand dollars in it, how can the legislators think that these same folks, can make significant retirement deposits and still afford to pay their usual bills, let alone save for an unexpected bill of $1000 or $2,000?

4. Another major flaw is that in many cases the new rules will generate less income tax then would have been generated under the old rules.

Take the example of a 85-year old parent that dies on Jan 1 of 2020 and leaves a $1,000,000 IRA to her married son who is age 50. He and his wife have a taxable income of $80,250. (top of the 22% fed tax bracket). Assume that the Federal tax brackets and tax rates remain the same and there is no state or city income tax. Assume a level rate of return in the inherited account of 6% a year. Note the following outcomes for the three options under the new rules compared to the former rules. 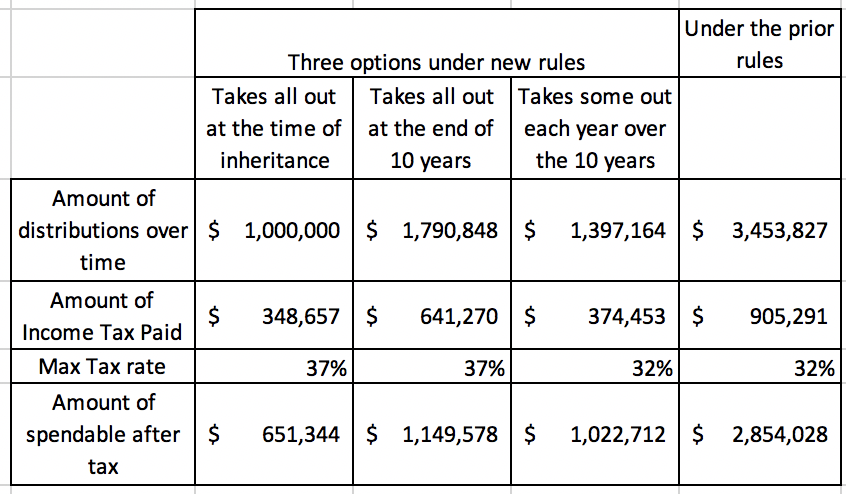 5. Again, from the example above, there is also many fewer dollars for retirement needs under the new rules as opposed to the former rules. So how is eliminating the stretch option a good thing for the beneficiaries or the tax coffers?

6. Perhaps the last negative is the potential loss of protection from creditors when the retirement plan assets are liquidated. Currently, 401k plans are not attachable in a lawsuit or from creditors and the same applies to IRAs in some States. With the new 10-year distribution rule, after the 10 years when the funds are withdrawn and deposited into other accounts, the funds are no longer protected and would be attachable.

The bill hurts or more accurately penalizes the heirs of many workers that have saved in the retirement plans for decades. The government has taken away the stretch IRA, which was a financial planning tool that has been relied on by millions of workers for years.

Fortunately, these new changes do not impact those plans that have already been inherited. They only impact accounts inherited in 2020 and later.

If you have any additional questions about this topic, please don't hesitate to reach out.